This Land is Your Land - triple mandolin

All Forums / Mandolin-Related Topics / Sound Off! (for Your Audio/Video Posts)

I recorded three mandolins and a guitar on this old folk song "This Land is Your Land" with my Eastman MD515. I got the mandolin used, and it needed some set up work on the neck action and relief, plus I got new frets too. I'll probably invest in a different tailpiece eventually because I do not like the Eastman tailpiece. 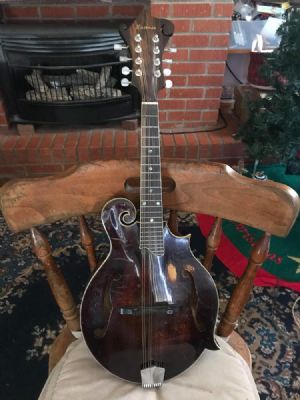 This Land is Your Land

Looks like the mandolin has a few miles on it, but I like that kind of character. Sounds nice too; clear and cutting.

I like what you did with the tune as well. Was it the same Eastman for all 3 mandolin layers?

Nice job. I put the Allen AR-2 on a couple of mandolins and really liked it. Easy to string and doesn't rattle.

My wife hear this from the other room and started singing Little Darlin' Pal O' Mine.

Well, old is a relative term and people have been trying to define what a folk song is for years and haven't come up with a definition that everyone agrees with yet.

If you know who wrote it, it ain't a folk song - Michael Cooney
All songs are folk songs. I've never heard a horse sing 'em - Big Bill Broonzy (credited to others as well)
If it takes more than 2 trips to get your gear to the stage, it ain't folk - ??
A 4 letter word that starts with F, ends with K and if you use it they won't play your songs on the radio - Catfish Willie
Since I bought my first issue of Sing Out! in 1961 I've been reading attempts to define what is a folk song.
I'll bet Woody wouldn't object to calling his song a folk song.  The tune was obviously borrowed, as many of his tunes were.  When he got a report of another singer stealing a line from his song he is reported to have said, "Hell, he just steals from me.  I steal from everybody."

At the bottom of his music was sometimes written, "This song is Copyrighted in U.S., under Seal of Copyright #154085, for a period of 28 years, and anybody caught singin' it and passin' it around without our permission, will be mighty good friends of ours, 'cause that's why I wrote it."

Didn't mean to ruffle any feathers, just figured with a song this well known and loved, credit where it's due.

Hope I didn't sound like my feathers were ruffled Brett. Just contributing to the conversation.

'Some incredible views (music via a Phoenix Jazz)' 5 days