All Forums / Mandolin-Related Topics / Other Topics


I have used flatwound strings for the past 15 years now.  I play exclusively Bluegrass.  I used Thomastik Heavy strings for almost all of that time but in August of last year switched to D'Addario FW-74 flatwound strings.  Wound strings have a steel core that is wrapped with an outer winding.  The outer winding on most strings is round and is usually made of some sort of bronze alloy.  There are other materials used, but the majority of the popular strings have a bronze winding.  The windings have space between them because of the roundness of the winding.  Flatwound strings are completely flat on the outside of the string and on the inside part of the winding that lays against the core.  There is no space between the windings at all.  The advantage to that is that dirt and oils from your fingers can't get in between the windings, which is one of the largest contributors of decaying string life.  As a result, flatwound strings last significantly longer.  I usually leave mine on for 10 or 11 months of regular use.  The only reason I change them is because of the physical wear on the underside of the string that goes against the fret.  It causes intonation issues and tuning issues.  The other main difference is the tone is much less metallic and "twangy" sounding.  I have never liked the tone from bronze so I have always used steel strings (the windings an every flatwound string I have ever seen is stainless steel).  I have lots of experience using several different brands of flatwounds, so feel free to ask if you have any questions.  Much of the results you get depend on a few factors.  How loud is your mandolin, because flatwound strings are a little quieter.  How hard do you play? The tone of your mandolin.  If you have a very bright mandolin then flatwounds will work nicely.  If you already have a very warm and mellow mandolin, flatwounds will probably be too mellow.  Flatwound strings are much more difficult to make so they are expensive, but the amount of time they last more than makes up for the initial expense.  I have used flatwound strings in 4 different Bluegrass bands and a couple of those are pretty strong rhythm bands and I have had no problem with volume.

I tried to draw a diagram that shows the difference between round wound strings and flatwound.  Hope it helps. 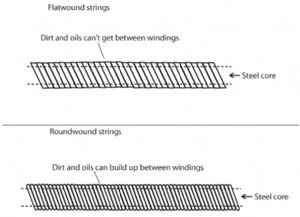 Ti I do play very hard I have a super super loud mando its a Lm700. What's better the thomastic string or daderio ? I burn through elixir med in a month in a half. Regular j75's will last 3 weeks maybe .

I really think the Thomastik's are a better engineered string, but for Bluegrass I would probably go with the D'Addario FW-74.  They are much closer to the tone of J-74's than Thomastik.  If you made a scale from 1 to 10 with 1 being the Thomastik's and 10 being the J-74's the FW-74's would be a 7 in terms of brightness.  The FW-74's are louder than the Thomastik's and seem to last as long.  I have had mine on since August and they still sound great to me.  The A and E strings are the same ones used in the J-74 set.  The G and D strings are lighter than J-74's but flatwound strings are a different animal and can't really be compared to roundwound strings as far as tension is concerned.   You'll have to try them and see if you like them.  Give them a good week or so to allow the new sound to settle in before you truly evaluate them. One other main difference between the Thomastik and D'Addario flatwounds is the Thomastik A strings are wound.  I always loved the sound of the wound A string and when I switched to the FW-74's I really thought I would miss that, but quickly found I didn't so much.  All flatwound strings, as far as I know, are wound with stainless steel, which doesn't corrode like bronze does.  That is one of the contributing factors to why they last so long.

I hope you like them.  I have always loved the sound and especially the feel of flatwound strings.  No scraping noise from your finger callouses on the string windings.  Much easier and smoother slides.  But I will admit, they're not for everyone.  Some people hate them.  I am looking forward to hearing your thoughts on them.

How's it going Y'all. Glad to see the discussion continue! Been pretty busy last few days. Hope to get back here and post some more later...

TSSN, you are officially the first owner of your very own bar stool!

Chrome legs,red Naugahyde and it goes right round ,right round like a record baby?

TSSN, you are officially the first owner of your very own bar stool!

Thanks, Ant.  And thanks to Ben for the Naugahyde.  And I'd like to thank the Academy...

Ha! Ha! Awesome. Hope everyone has a wonderful Thursday.

I just saw daily and viencent. (-:

I just saw daily and viencent. (-:

Happy Friday Infinity Bar and Grill! I plan on doing some serious pickin' this weekend!

At d and v it was killer parker and bj and Joe dean ripped that song a new one man it was tough and I got vid that will be on YouTube later its a vid of sally gooden its the best ever its tough they did blues it up to. They are now my fav Bluegrass band, the harmony was crazy. It talked to paker about his mando he was playing A custom weber it was nice it had good pop. He's got a madcaf is that how its spelled he has that for sell for 6000$ it sounds good to. I can't belive they don't use a bluechip. They all use a .96 derlin pink dunlop I no this becuse parker droped one on stage and I got it (hahah and he autographed it ).... TSSN he also plays a shawnee mando like uers. Il let u no when that vid is up. It's got a very good the vid will.

mandolin boy, let us know when the video is up.  I met Parker last year when the played the Sheldon in St. Louis (and I'm seeing Suzy Bogguss there tonight.)  Anyway, he's a great guy.  I heard he might be getting a Shawnee Creek then.  So he has it now?  Did he play it?

I'm liking the Gravity Picks the more and more I play it.  Not so much on the Surf Picks (which I should write something on sometime).  It doesn't have to cost an arm and a leg to get the job done.

No he did not play the shawnee he played a weber . How good are surf picks? TSSN what all picks do u own or played ? Sounds like a lot ?

My usual pick stable consists of Golden Gates, Wegens, Dunlop 207's, and V-Picks.  Lately I have been hitting the Gravity Picks pretty hard, and I do like them very much.  The Surfpick feels good, and is certainly stiff as a stone, and so is not so good for quiet practice or trying to pick out a tune from memory.  The pick fairly well "clacks" against the strings.

And we forgot to count.

Well that vid will be up tonight i will let u no exsactly when. Any body have any music stuff for trade? I have some sample picks is like to pass on.

Good Morning All! Hope everyone had a great weekend. Thanks for the link mandolin boy!

'How to Date an Ibanez Mandolin' 9 days